Spring has sprung in Toronto! These are the little crab apple blossoms on the trees by my patio. It’s been a chilly spring, and I took this photo last week while playing outside with the kids. But over the last few days the weather has really improved and there is loads of much-needed sunshine, and the plants and flowers are really getting lush, which is so lovely to see. It’s one of the gifts of this strange time, to slow down and appreciate what we have.

Without a doubt, spring is the perfect season for fingerless mitts. Especially if they are the colour of flower petals.

Not that you know it from the many, many times I’m willing to take my coat off outside in the winter just for the sake of a good knit photo, but I’m usually chilly. I’m that person who starts wearing tights under their jeans around mid-November and carries on until April. All my sweaters have tank tops or t-shirts under them. Layers are a cold person’s best friend! So when you get cold as often and as easily as I do, fingerless mitts are perfection. I’m always typing, or knitting, or taking photos, and you would think that all that activity would keep them warm, but no — my hands are always cold.

The Heyworth pattern is from Plum Dandi Knits, a pattern collection I recommend back in January. I bookmarked several patterns from this collection, but these mitts are the first things I’ve made from it so far. I’m really happy with how they turned out- they look exactly like the pattern photos (we all know that doesn’t always happen). The only thing I found a little strange is that the increases for the thumb gusset were the reverse of what I would have done- meaning the M1L was done when I would have naturally done a M1R, to have a more defined edge to the gusset. But it works with the highly textured fabric of the mitt, so all’s well that ends well.

This is my first time using Rohrspatz & Wollmeise yarn, and I’m really impressed. The yarn is from a family-run small business in Germany, and is stocked in select yarn stores all over the world, although with the modern wonder that is online shopping, you can easily order from the site and have the yarn shipping directly to your doorstep.  The yarn I chose is from their Blend line, and it’s a butter soft melange of merino, cashmere and nylon. Having anything with cashmere in it on a delicate area like your wrists automatically feels like heaven.

The Blend line comes it more colourways than you can imagine, and I had a really tough time deciding – but it’s funny how we crave those lighter spring colours after a long winter. And this colourway seemed to be the perfect balance between a dusty rose and a pale lilac, and I like that it was a little hard to pin down, it make the eye linger a little longer.

I was blown away by the yardage (364 yards) in a single skein of this yarn- I only used about 25% of it for these mitts, so now I’m thinking of something that coordinates- a hat perhaps, or a small cowl? I’d love to use the same sort of stitch as the mitts. I’m already looking forward to using this yarn again – and I’m kind of kicking myself for not getting a sweater’s worth, because this would be a fantastic sweater yarn. Next time! Or maybe these sets of mini skeins….. I know, I know. so easily distracted.

This is sponsored post from Rohrspatz & Wollmeise. All opinions expressed are entirely my own.

I feel like this shot has a total 1960’s vibe going on, thanks to whatever combination of Instagram filters I used when I posted this to my Instagram stories yesterday.

Pattern: When Life Gives You Lemons, by Lori Steinberg

Mods:  I used smaller needles, changed the shaping at one end (weirdly the pattern didn’t have the same increases/decreases at both ends), and added some soft toy sculpting at the ends for that lemony shape.

My coworking space (you may remember it from this post) is called Make Lemonade, so I asked the owner if she would be interested in a big lemon pillow for the grey, cushion-less couch in the waiting room. She looked pretty excited, so this fulfilled my two qualifying criteria when it comes to knitting for someone else: 1. Always ask first, not everyone cares about hand knits. 2. That the offer is met with genuine interest or excitement.

So, I knit the pillow over a weekend when my parents were visiting to spend time with the kiddos. James ‘helped’ me with the yarn:

It’s not the best shot, but it’s pretty clear that he created a big tangly mess of yarn. I had to cut it and re-attach in order to keep knitting. Fortunately, I had LOADS of the yellow yarn! But even with a minor setback, it was a super quick knit. I held aran weight generic craft yarn double, which worked really well with the 8 mm needles. As I mentioned, the pattern doesn’t have the same shaping from one end to the other so I reversed the shaping at the end to match the start.

To give the ends their typical lemon shape I used this tutorial from fuzzymitten’s blog. it provided the right amount of sculpting so that it was undeniably a really big lemon pillow – which is an odd thing to walk around with, really. Lots of people asked me about it, particularly when I was in line at a cafe to get coffee on my way to Make Lemonade. Maybe you saw the photos on Instagram:

Fun fact: it is impossible to be in a bad mood when walking around a city with a big knitted lemon. I would do that again. It was a great contrast for my recently-finished Heyworth mitts.

Doesn’t it look so great on the couch? Wasn’t that couch just crying out desperately for a big lemon pillow? And the yellow matches the yellow wall perfectly. There’s only one yellow wall, by the way. Otherwise that might be a bit too much.

I’ve been told that they get a lot of comments about the pillow, and it’s only been there a little over a week. I’ve even started to notice that it’s cropping up in photos that are tagged @makelemonadeco, which is fun. I’m glad I’m not the only one who loves to have their photo taken with a big knitted lemon.

Curiously the pattern isn’t in Ravelry, but it is free and available online- I linked to it up at the top if you want to check it out. I made notes on my Ravelry project page for the modifications so they are all in one spot, too- you can find here. 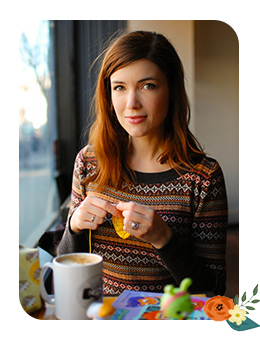 Here's how we did it!